It seems that the Internet Explorer team from Microsoft is working hard to improve the quality of the much criticized non standard compliance IE generation (5 – 6 -7).

With respect to standards and interoperability, our goal in developing Internet Explorer 8 is to support the right set of standards with excellent implementations and do so without breaking the existing web. This second goal refers to the lessons we learned during IE 7. IE7’s CSS improvements made IE more compliant with some standards and less compatible with some sites on the web as they were coded. Many sites and developers have done special work to work well with IE6, mostly as a result of the evolution of the web and standards since 2001 and the level of support in the various versions of IE that pre-date many standards. We have a responsibility to respect the work that sites have already done to work with IE. We must deliver improved standards support and backwards compatibility so that IE8 (1) continues to work with the billions of pages on the web today that already work in IE6 and IE7 and (2) makes the development of the next billion pages, in an interoperable way, much easier.

But IE is from far not the only browser that does not pass the ACID Test 2:

According to Dean Hachamovitch the result for IE8 would be smiling: 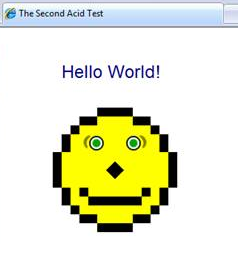 The Acid2 test has been ignored by Microsoft IE for so long that it was quite a surprise to see them make an effort in that direction, certainly the rise of Firefox (who does not passes the Acid2 Test but is more standard compliant) is not for nothing in that move.

* Transparent PNGs — The eyes are encoded as transparent PNGs.
* The object element — The eyes of the face are attached to an object element. Being able to use object (which can have alternative content) is one of the oldest requests from web designers.
* Absolute, relative and fixed positioning — Being able to position elements accurately is important for advanced page layouts.
* Box model — The original Acid test focused on the CSS box model. Acid2 continues in this fine tradition by testing ‘height’, ‘width’, ‘max-width’, ‘min-width’, ‘max-height’ and ‘min-height’.
* CSS tables — There is nothing wrong with table layouts. It is a powerful layout model which makes sense on bigger screens. However, the table markup is troublesome as it ties the content to these screens. Therefore, being able to specify table layouts in CSS is important.
* Margins — CSS defines accurate algorithms for how margins around elements should be calculated.
* Generated content — The ability to add decorations and annotations to Web pages without modifying the markup has long been requested by authors.
* CSS parsing — Acid2 includes a number of illegal CSS statements that should be ignored by a compliant browser.
* Paint order — We test that overlapping content is painted in the right order. This is not a feature in itself, but a requirement for other features to work correctly.
* Line heights — The Acid2 test checks a few key parts of the CSS inline box model, upon which any standards-compliant Web page depends.
* Hovering effects — One of the elements in the face changes color when you “hover” over it. Which one?

That is one more good move from IE after deciding to remove the “Click to activate” by April 2008.